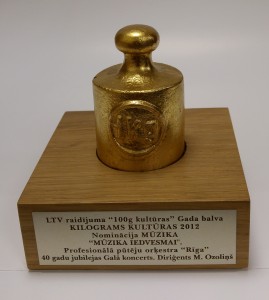 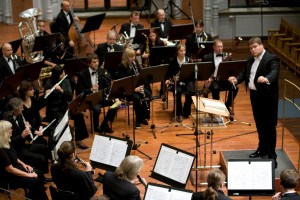 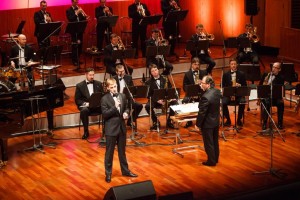 From 2007 to 2010, the Orchestra RIGA was led by the conductor Andris POGA (30.06.1980), who became the first prize winner of the Second International Evgeny Svetlanov Conducting Competition in 2010. These four years saw a significant surge in the orchestra’s development – A. Poga demanded high quality professional play and an interesting concert repertoire, which included arrangements of excellent classical pieces (Orff’s Carmina Burana, Stravinsky’s Rite of Spring, Brahms’ Ein Deutsches Requiem), new tendencies in the repertoire of world-class symphonic bands, as well as new works by Latvian composers. Among the latter, commissions made by the orchestra must be mentioned: the cantata  Latvia. Impressions of the Seasons by Ēriks Ešenvalds (2008), Nick Gotham’s Every Day (2010), Vilnis Šmīdbergs’ Symphony (2010, recipient of the Grand Music Award in the category Best New Composition of the Year), Drone by Andris Dzenītis (2010), Ilona Breģe’s Requiem (2010), Imants Mežaraups’ cantata For the Taken Away (2011). Under A. Poga’s leadership, the Orchestra RIGA recorded two albums: Merry Christmas! (2007) and Windstream (2008). Each spring since 2010, the orchestra has organized the Spring Festival WINDSTREAM, which has acquired great recognition among the residents of Riga.

In 2008, the work of conductor Andris Poga and the managing director of the orchestra Ilona BREĢE has acknowledged with the Annual Award of the Riga City Council The White Sparrow. In turn, the orchestra itself was nominated for the Latvian Grand Music Award as the 2010 Best Musical Group in Latvia.

For four years, since the beginning of 2011, the orchestra’s artistic director was the laureate of the Jorma Panula Conducting Competition Mārtiņš OZOLIŅŠ (18.05.1974). During his tenure, the Orchestra RIGA celebrated its 40 year anniversary in 2012 and one of their concerts – the Gala Concert Music for Inspiration won the annual Latvian Television and Latvian Radio Kilograms kultūras Award. The International Composers’ Competition WINDSTREAM 2014, organized under the sign of J. S. Bach, was one of the City of Riga’s projects in 2014, as the European Capital of Culture. Exposure of new compositions by Latvian composers was increased with: Nick Gotham – Step. Pivot. Stride (2013), Vilnis Šmīdbergs – Concerto for Alto Saxophone and Orchestra (2013), Andris Dzenītis – Urban Mass (2014), Nick Gotham and Kārlis Auzāns – Ode to Yuri Gagarin with a cello trio solo (2012), Uģis Prauliņš – Fantasia (2013). A fortunate and productive collaboration was undertaken with Maestro Raimonds Pauls, resulting in three new concert programs and restoration of such compositions as the jazz suite Black Colours, Rhapsody for Piano and Orchestra, the vocal cycle The Stained Glass of Old Riga and other pieces. Alongside M. Ozoliņš, the conductor Raitis AŠMANIS worked with the orchestra until the autumn of 2015, under whose supervision were jazz, rock and latino concerts. In October of 2011, the Orchestra RIGA presented two concerts in the Grand Hall and the Small Hall of the St. Petersburg Conservatory during the Riga Days festival. In 2014 the Orchestra RIGA performed in Pori, a twin town of Riga in Finland. The albums Riga –Tannenbaum-Christmas Tree (2011) with conductor Mārtiņš Ozoliņš, and Riga Jazz (2014) with Raitis Ašmanis and Raimonds Pauls were recorded.

With the start of the 2015/2016 season, the artistic director of the Orchestra RIGA is Valdis BUTĀNS (12.11.1981), a young conductor, full of initiative to realise as yet unprecedented concert projects. Such can be considered to be the American composer S. McAllister’s composition Mercury on the Moon, presented in 2016 during the Spring Festival WINDSTREAM with soloist Jānis Šipkēvics. Valdis Butāns holds a Master’s Degree in Symphonic Orchestral Conducting from the Jāzeps Vītols Latvian Academy of Music. He has studied at the Vienna University of Music and Performing Arts with Professor U. Lajovic, and has attended master classes in conducting under L. Köhler, P. Burin, Y. Simonov, Ž. Naģis. Previously, Butāns has worked as assistant to Karel Mark Chichon in Riga, and during the 2012/2013 season at the German Radio Philharmonic Saarbrücken-Kaiserslautern. He was engaged for two seasons at the Latvian National Opera, where he conducted performances of Lucia di Lammermoor, La Bohème, The Little Chimney-Sweep, and has been the musical director of the production of Le nozze di Figaro by W. A. Mozart.

Currently the Orchestra RIGA presents itself as a concert orchestra, with performances in Riga City festivals and on nationally significant days, with concerts in Riga concert halls and in the Riga Cathedral. Young listeners are invited to attend conversations about music in the cinema Splendid Palace. Compositions in the most diverse styles are performed, and the orchestra is always searching for the new and undiscovered in music.